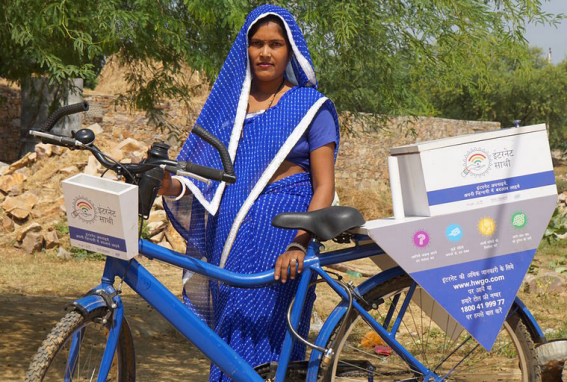 Google is working to change this and is providing increased access in remote areas by using thousands of female trainers across India. The trainers get around the region by riding bicycles; each bike has a box full of tablets and smartphones for women to try, and to train on. The goal is simple – provide people with the tools and understanding of how being connected could benefit their lives.

In rural India, only one in 10 women currently use the Internet. Many women are kept from using the Internet due to economic and cultural barriers. In a country of 1.2 billion people, nearly 1 billion still do not have access to basic Web services.

Google partnered with a local philanthropy, Tata Trusts, in the project named “Internet Saathi,” to show women in rural India how to connect to the Web. Instructors are trained on how the Web works, then are given bicycles with equipped with devices running the Android mobile operating system.

The project has already trained 9,000 guides, who have helped reach more than 1.5 million women in 12 states in rural India.

Spectacles Update: Looking for a place to buy a pair of Snap’s new sunglasses with embedded camera? Unfortunately, the glasses will not be at a store near you anytime soon. In an unusual guerrilla marketing rollout, Spectacles are only being sold through bright yellow vending machines called SnapBots. The first SnapBot was in Venice Beach on November 10, where the glasses quickly sold out to waiting fans.

The pop-up shop model fits Snap’s playful brand, right down to having the kiosk disappear just like how photos disappear on Snapchat. Customers lucky enough to find a SnapBot can try on the glasses virtually at the kiosks using a circular display.

Just to remind you what Spectacles are: the sunglasses can record 10 second videos, up to 30 seconds, using a 115 degree lens that closely approximates how the human eye sees things. Spectacles are priced at $130 and come in black, teal, and coral colors. Transferring videos is a ‘snap’ – the connection to smart phones and Snapchat is via either Wi-Fi or Bluetooth. It’s a big market, too. Snapchat app has 150 million users each day, and 41% are 18 – 34 years old.

Kiosks are placed in a single location for only 24 hours so you have to move fast. If you want to know where the next kiosk will be, go to Snap’s Web site and cross your fingers it will be near you.

Consumers are usually in a rush. And we also forget to re-order certain products in time to prevent a stock-out at home. Luckily, Amazon has a solution for easy reordering of 266 different products, just in time to avoid running out of basic supplies! Just push a button and the order is placed and shipped automatically. The company now offers three new product options that can be ordered via Dash – Amazon gift cards, Amazon Basics batteries, and Amazon Basics pet supplies.

Amazon Dash Buttons are now available for more than 266 different consumer products, including customer favorites such as Tide, Bounty, Clorox, Gatorade, Gillette, and more. Buttons are small Wi-Fi connected devices that can be attached to most any surface or location. To use it, customers download the app, sign into their Prime account, connect Dash to Wi-Fi, and select the product to reorder. Amazon sends an order confirmation to the customer’s phone, making it easy to track or cancel the order. The buttons initially cost $4.99 and are available only for Amazon Prime members. (For every Button purchased, Amazon gives the buyer $4.99 in credit.)

No need for a list – or for going to a store. Just press a button and products appear soon after!